I headed south on Hwy 240 and got to the Badlands where a cute park ranger took my cash. I was about to ask her if there was a Mr. Park Ranger but I’m too old for that old rigmarole. Besides, look at me.
Here’s a photo of one area in the park. 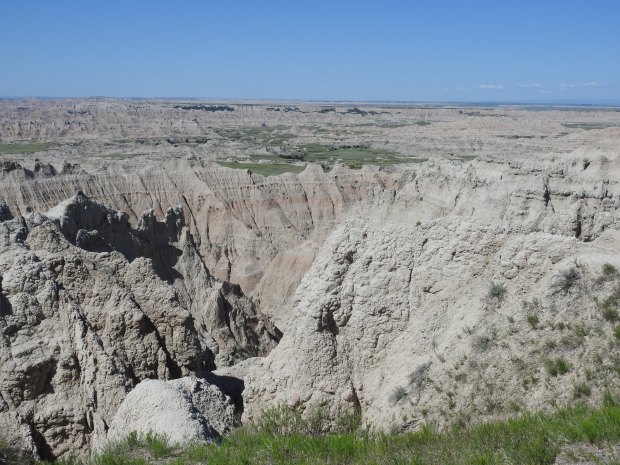 The park has “sharply eroded buttes, pinnacles, and spires blended with the largest undisturbed mixed grass prairie in the United States.” (Wikipedia). The beauty of the layered colors got to me – tan, orange, limestone colored, the immensity of the place, as well as the silence of the wind blowing across the prairie. I saw grazing buffalo, vigilant prairie dogs and wandering bighorn sheep.
Leaving the park I caught up with scenic highway 44, which was scenic and also bumpy, offering what was tantamount to free Heimlich maneuvers every ten yards. I drove back up to I 90 and found it much smoother. I rode it until I needed gas and after crossing the wide beautiful Missouri river I exited at the town of Chamberlain. While there, I went, of course, to McDonalds. While I was having a coffee, I heard a guy playing the flute and walked over to him. He stopped and handed me the flute. He told me he had made it, described its features and pointed to the inlaid crushed turquoise. “That’s what took me the most time. It’s a pentatonic scale in the key of F.” He told me that his grandfather taught him how to make them but that his children didn’t want to learn. I thanked him for letting me see it and that it was beautiful. I could tell he was proud of it. He should be. I drifted back to the table and listened more to the dulcet, warbling tones of his flute. The sound of the Native American flute is so soothing and ethereal.
I had only 136 miles to go to Sioux Falls and a full tank of gas. The speed limit was 80 and I cruised at that speed, forgetting how much gas Big Red drank at high speeds. At about 115 miles I realized I wasn’t going to make it. I cut my speed to 75 and started looking for gas. No Luck. My warning light came on. Then I went down to 70mph and then 65. Still no gas. Finally, after about five more miles I spotted a sign and coasted down the long exit. I managed to get her over to the nearest station without her conking out. I filled her up and then asked the clerk about the bar across the street – Big J’s Roadhouse. She said the food was very good. So Big Red and I moseyed on over and got some fries and a nice Bell’s lager. The waitress kept calling me “sweetheart”. I don’t mind that. In Georgia I get called ‘honey’, ‘darling’, and ‘sugar’. I like it. Last night, the male bartender kept calling me ‘Captain’ in what I assume was a response to my rugged and commanding bearing. Or maybe he was thinking of Captain Crunch?