It’s been a tough month, riding the 90-mile round trip to work, on Big Red, my 2004 Harley Road King Classic. The bike wasn’t the problem though, it was me. If you’ve read some of my stories from the last few years you’ll know that I’m one biker who makes a lot of mistakes. It’s not unique to my motorcycling either because I make a lot of mistakes in pretty much every area of my life. At least I’m consistent. So, it came as no real surprise to me when I left my lights on and had to get a couple of guys to push me, which didn’t work and then I had to get a car to jump me off. I ran out of gas two times, and yes, Big Red does have a warning light, and I was watching it, but she died on me. Each time though I managed to shake the bike left and right enough to get some gas flowing so I could ride and then coast into the gas stations.  Running out of gas on the Trans-Canada Highway last summer should have taught me a lesson, but I’m a slow learner. I also forgot to bring my rain trousers and so I got soaked a few times. I’ve decided to just call it all” “Practicing for my Trip”.  The only thing I haven’t practiced is getting lost, but then I don’t really need any practice with that. I’m an expert. This year I’m heading to California for my daughter’s graduation from university. When I leave California, I’m going to leave my next destinations up to Divine Providence, which has at least one thing going for it: you can’t get lost if you don’t know where you’re heading. I’ve gotten the bike all spruced up in preparation. She’s just shy of having 92,000 miles on her so she needs tender loving care. I got all the oils in the bike changed, two brand spanking new whitewalls and I replaced my windscreen, so she’s ready to go. 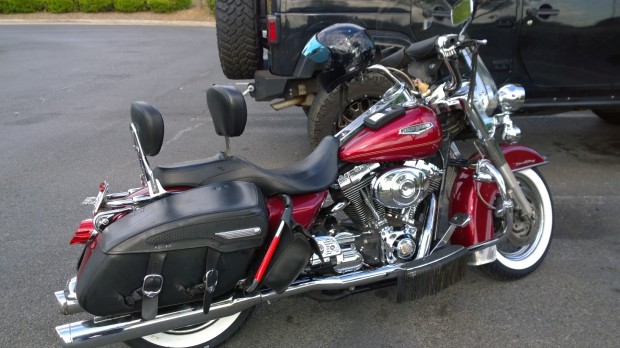 And hula girl is properly installed. Doesn’t she look good for a 13 year old bike!
I’ve been practicing too. I’ve been eating granola bars and beef sticks and dining at some sketchy restaurants. I also bought a new Saddlemen S3500 Deluxe sissy bar bag to hold all my belongings and a Nikon Coolpix P900 camera so I can get good photos of the graduation and the trip. To top it off I bought 10 nice Acid Kuba Kuba cigars to put in my travel humidor for the trip. I like to smoke a good cigar when I’ve achieved something or when Big Red’s broken down and I need to Zen out and think.

We head out on May 12th. Last year we rode from Georgia to Alaska and then down the west coast along the Pacific Coast Highway to Los Angeles. After that we headed home. You can read my previous blog entries if you want to see how that trip shaped up. As Hazel the maid from TV used to say: “It was a real doozy.”

This year, after California, I don’t know where I’ll end up. When you abandon yourself to Divine Providence and Fate you can’t pick and choose your destinations. So, stay tuned.

2 thoughts on “Dead Battery, Running Out of Gas (petrol), Getting Soaked Equals: Practicing for My Cross-Country Trip”