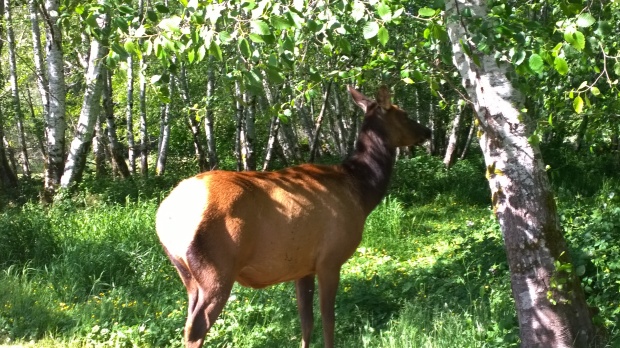 I made it to Eureka when Big Red decided she’d had enough. She didn’t break down but she grew louder and louder and people were staring. I spent an hour trying to fix her. However, I am mechanically incompetent. The good news is that I know what’s wrong. The bad news is that I couldn’t fix her. I tried everything, including that old southern standby: spit, juicy fruit and the Lord’s Prayer. So we’re going to have a layover for two nights. Two, because the Harley shop here is closed until Tuesday.

But the ride before that was amazing. Not only did I go through the Redwood Forest and got to slalom along beautiful curvy roads, saw the huge redwoods, but I also came upon a herd of elk. I pulled over and counted 32 of them. Then a few miles down the road there were a few hundred of them. I think it was a convention. Elks. Get it? Sorry.

The photos are of the Pacific coast and of an obliging elk.