Marches, Rides or Walks – We All Have a Choice. Pow Wows and the Dalai Lama. 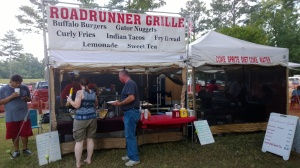 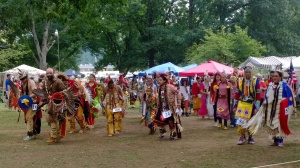 “All major religious traditions carry basically the same message – that is love, compassion and forgiveness … the important thing is they should be part of our daily lives.”

This week there was the celebration of the March on Washington which had occurred 50 years earlier, in 1963, and was one of the largest rallies for human rights in US history. The quote: “Injustice anywhere is a threat to justice everywhere” had been running through my head all week like a song you love but can’t get rid of.

I was thinking about all of that yesterday while I rode the BMW up to Ridge Ferry Park here in Rome Georgia to attend the annual Native American Pow Wow. There were hundreds of people there, many having camped overnight in the park. The Roadrunner grille offered buffalo burgers, gator nuggets, Indian tacos and, of course, sweet tea. There were dance competitions for the young and old, with elaborate and intricate hand-made costumes that must have been unbearable in the 90+ degree heat. The drum beating was mesmerizing, powerful and resonated with something deep in me, though I’m 50% Irish (maybe the bodhran drum!) and the rest, French and German. Handmade Native American crafts, jewelry, paintings and music were all for sale. Catchy and thought provoking bumper stickers were also available. For example: “Homeland Security: Fighting Terrorism Since 1492”; “Indians Discovered Columbus”, and “I am Cherokee and Still Living in my Original Homeland.”

The Pow Wow was beautiful, powerful and poignant.

There was a booth selling beautiful tie dyed tee shirts. One caught my eye as it was commemorating the 175th anniversary of the Trail of Tears march. This was when the US government and the State of Georgia began the forced removal of over 16,000 Cherokee people from their homelands to Indian Territory (Oklahoma). Over 4000 died on the journey west.

In Georgia, as well as in other states, you can ride a series of roads called the Trail of Tears Highway, roadways where the Native Americans were forced to march on their way to Oklahoma.

It was a sad chapter in American history; however, to hear Cherokee spokespeople talk about it now it’s also a story of courage, triumph and perseverance.

On September 21st the 20th Trail of Tears Commemorative Motorcycle Ride will take place, beginning in Bridgeport, Alabama and ending in Waterloo, Alabama. It’s the largest annual motorcycle ride in America and it was originated to raise awareness of the “horrible way American Indians of the southeast were treated because of racism and greed”. (al-tn-trailoftears.net/ridehistory.php). Racism – other isms, and greed are still very much with us.

It got me wondering: In the year 2188 what will our country be commemorating on the 175th anniversary of 2013? I hope it’s a celebration of our actions this year in peace, compassion and in the recognition of national and international human rights, respect for the dignity and worth of all individuals.

The Dalai Lama said: There is no need for temples, no need for complicated philosophies. My brain and my heart are my temples; my philosophy is kindness.”

We might not have the inclination to ride with groups or the opportunity to march for justice but, every day as we journey in this world there’s nothing stopping us from showing compassion and loving kindness toward absolutely everyone we meet. Marches, rides or walks, we all have a choice.

2 thoughts on “Marches, Rides or Walks – We All Have a Choice: Pow Wows and the Dalai Lama.”